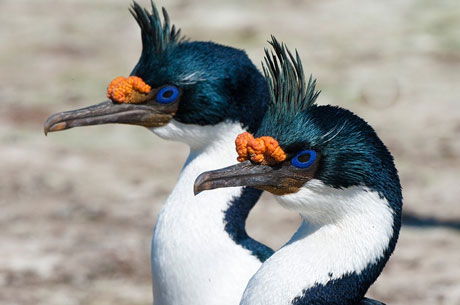 Marine Sanctuary is one of the key wildlife attractions in Gujarat which showcases the varied maritime flora and fauna of this region. Marine Park is situated on the south coast of the Gulf of Kutch.

In this Gulf of Kutch region, 42 different islands are located like small gems amidst the Arabian ocean. The islands of the Marine National Park are heaven for the birdwatchers and the real treasure for marine species these are fringed by exotic coral reefs, beautiful sandy beaches along with mangrove swamps.

Out of these 42 islands, the well-known one is Pirotan Island previously called as Pir Jo Thaan which means the holy place of the renowned Saint Khwaja Khizer RahmatAllah).

The Marine Sanctuary region is known for following attractions –

Birding in & around Marine National Park and Jamnagar

Jamnagar is a real paradise for the bird lovers and it is the only place in entire India where you can find Crab Plovers in massive flocks. Khijadia Bird Sanctuary is a great place to spot many birds as it is a very unique place of wetland which has water of sea on one side and on other side the fresh. There are few water tanks near to Jamnagar which good place for bird watching.

Charakhala Salt Pans region is famous for flamingos, grebs, pelicans, ducks and terns, etc. Charakhala Salt Pans is one of the some regions of Indian peninsula there one can spot the nesting of Caspian Tern. The other interesting places for birding are Narara Island. Pirotan Island, Barda hills Sanctuary, Lakhota Lake and Dhichda.

The other places of interest in Jamnagar

How to reach Marine National Park

Air: Jamnagar airport is 10 KMS away from Marine Sanctuary