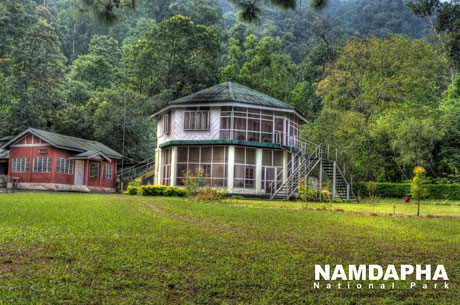 Namdapha National Park is a one of the richest national park in terms of variety in flora and fauna in the entire Indian Subcontinent. It is due to the biogeographically situation of Namdapha within the Indo-Chinese sub-area.

Namdapha National Park is one of the richest national park in terms of variety in flora and fauna in the entire Indian Subcontinent. It is due to the bio-geographically situation of Namdapha within the Indo-Chinese sub-area. Along with Namdhapa Check out our all national park of India and choose the best destination where you want to go, inside Indian jungles wildlife tour operator everything manages for you.

The huge altitudinal difference of Namdapha National Park, from 4,500m at Daphabum, which is the highest place to 200m located in the low valleys make it a unique place.

The Namdapha National Park has mainly hilly region and drained by various rivers as the Noa-Dehing, Namdapha and Deban Rivers.

Upper is the deciduous jungles along with moderate and alpine jungles still higher where the trees like Oak, Pine, Magnolia, Betula as well as Rhododendrons rise in abundance. Namdapha National Park is a botanical paradise having more than 150 species of the trees and various flowers as well as orchids, which includes the Blue Vanda – one of the very rare orchids.

It is a paradise for bird watchers. The main birds of the Namdapha are the Satyr Tragopan, Monal Pheasants, Kalij, Giant Hornbill, the endangered White-winged Wood Duck and Forest Eagle Owl.

The main reptiles are the Indian Python as well as Reticulated Python and also the King Cobra. In mammal species Namdapha has Tiger, Clouded Leopard, Leopard and Snow Leopard. Namdapha also has very healthy numbers of the Hoolock Gibbon.