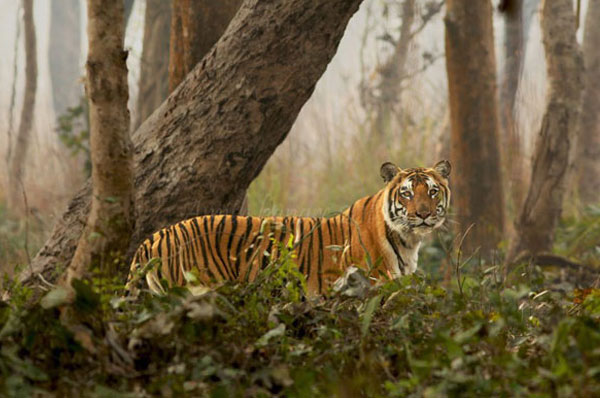 Sunderbans National Park became tiger reserve in 1973 and declared the national park in 1978. It is also the UNESCO World Heritage Site. Located on the delta of two grand rivers of India, Ganges and Brahmaputra.

Sunderbans National Park was declared as a tiger reserve under Project Tiger in 1973 by Government of India and was given the status of the national park in 1978. It is one of the UNESCO World Heritage Sites in India too.

The huge marshy delta of two great Indian rivers as Ganges and Brahmaputra expands over areas, which include the mangrove forest, marshland and jungle island all mixed in a system of small rivers and also some streams.

Sunderbans is the largest mangrove forest in the world. The name Sunderbans has come from Sundari plants, which were in a large quantity once in this region. The sacred Ganges River and the Brahmaputra from 54 island’s alluvial archipelago, that is watered by the great Bay of Bengal.

The famous islands like Sandeshkali, Goasaba and Basanti create the northern boundary of the national park and on the southern side is the sea. In the western part are the rivers as Malta and Bidya whereas the eastern side is the international border of Bangladesh.

Sunderbans is one of the biggest deltas in the world. The major attractions of the park is its topography. The major animal of the national park is the Royal Bengal Tiger. and it’s one the most famous place for tiger safari in India

In Sunderbans, the population of the tigers is about 250. The Royal Bengal Tigers in the Sunderbans national park have created an unique feature to swim in the salty waters, that has made them quite popular world over due to their man-eating behavior.

The birds in Sunderbans

The reptiles of Sunderbans National Park

other attractions of Sunderbans

Kanak
Kanak is among of the finest destinations to view the nesting of the Olive Ridley Turtles.

Piyali
Piyali is known as gateway to Sunderbans National Park and is 72 KMS far from the capital city of West Bengal Kolkata by road. It is closely situated to Sajnakhali, Netidhopani and Sudhanyakhali through water route.

A quite small river famous as Piyali flows by the eye-catching green paddy fields and in the end merges with mighty Matla River. Beautiful Piyali delta creates a spontaneous vacation place for the tourists.

Kaikhali
En-route to Sunderbans, don’t forget to visit Kaikhali Island – because on this beautiful Island, the nature is at its best and entirely colorful. It is very famous as one of the finest picnic destinations in this area.

The ideal time to visit Sunderbans is from October to March.

How to reach Sunderbans

Air: Kolkata airport is located 112 KMS away from the park.

Road: Kolkata for Namkhana (105 KMS), Sonakhali (100 KMS), Raidighi (76 KMS), Canning (64 KMS) and Najat (92 KMS), these destinations are near to Sunderbans National park and are well connected to the popular waterways going to Sundarbans.

For more details about sunderban national park you can explore Wikipedia.[/vc_column_text][/vc_column][/vc_row]